Q: Please tell us about yourself.

A: I teach Ethnic Studies and tutor writing at a university. One of the classes I teach is about tracing and dissecting the various tropes in media that have popped up in the course of the American experience. I love pop culture of all eras for what it shows us about the hopes, dreams, and fears of people from all spectrums of the human experience. I tend to be very loud and boisterous when I speak, which can be really off-putting for some people. Although I come across as a cynic, I actually have an optimistic streak a mile long—I like to see the best in people, because if I don’t, then what’s the point?

A: Washed Hands is my take on the hardboiled, noir-style fiction that I love while still maintaining a kind of post-modern self-awareness. I realize that sounds super pretentious, but it’s really not meant to be. It’s just a fancy way of saying that it recognizes the conventions of the genre while still having fun with them.

Hm. Maybe that sounds pretentious, too. I’m bad at this.

Anyway, Washed Hands follows Monica Deimos, a thirty-year old woman working for the titular agency of Washed Hands, Inc. Her job revolves around ending relationships that are stickier than most—divorces, emotional manipulation, that kind of thing. She’s called in to take over a case that she realizes all-too-late is a set up. Now framed for the murder of a wealthy socialite, she has to race against time and the police to find out who wanted her framed and why.

Q: What inspired you to write Washed Hands?

A: Although I can’t speak to how universal the experience is, I feel that the toxic breakup is something that a lot of us can relate to. Most of us like to imagine that we are good, decent people that strive to do the right thing by ourselves and others. And yet, when it comes to relationships ending, our brains kick into “burn bridges” mode and turn us from who we want to be into really awful people. I’ve been on both sides of the equation of a break up, and I’ve also been that toxic moron struggling to maintain something dying in desperate, borderline-insane ways.

It’s embarrassing looking back on that.

As I became more aware of the experiences others were having, it became apparent that an institution like Washed Hands—a place that handles breakups and sets conditions and limits on people’s behavior in clear terms—is something I’m surprised doesn’t already exist. People just get so weird (understandably so—I’m not saying that this stuff is beyond comprehension) that having a third party to maintain civil discourse appeared to be a natural extension of this topic.

So I wrote this as a joke and moved on: http://bit.ly/17BwHaW

It was just kind of a fun little thing that was never expected to stick with me. But it did. The more I thought about it, the more I thought that it could make a compelling backdrop to a thriller in a traditionally detective-ish style. So I started writing Washed Hands later that year. Believe it or not, I think I only plotted seven chapters initially. It… kind of snowballed from there.

Q: How much time per week do you spend writing/editing your work?

A: Since school is back in session, it’s been a bit cramped in terms of writing. But how it will usually end up breaking down is about two to three hours on my writing days committing things to paper (or an electronic version of it, if we’re being completely honest) followed by an additional thirty minutes revising. The only reason that it’s so short is because most of my writing at the moment is focused on my blog—as a tremendous dork (and inspired by Jenny Trout and her analysis of 50 Shades of Grey/Buffy the Vampire Slayer), I took it upon myself to play through the Silent Hill video game series and critically evaluate the narrative and anything else I come across. As such, that writing is pretty plotted out already.

Now, for my fiction work? That’s a different bag altogether. I will plow through a chapter in about three or four hours (depending on length, it can be up to eight). Then I’ll break, then go through it again, adding, deleting, and what have you. The end result can be anywhere between six and twelve hours. Although I think the longest I’ve spent writing and revising has been twenty hours on one chapter, and that was obviously (at least, I hope it would be obvious) over the course of three days.

It’s not as much as I’d like, to be honest, but those episodes of Gilmore Girls won’t watch themselves.

A: Roderick Thorp, the author of The Detective and Nothing Lasts Forever.

J.K. Rowling, because Harry Potter was and continues to be wonderful.

For my blog, I’m still working on my Silent Hill analytical takedown. I’m also developing a class on the history of Milwaukee in regards to gender and ethnic identity.

But I have a feeling most people would be far more interested in my fiction, at which point I’m working on three things: a sequel to my first Booktrope novel, a sequel to Washed Hands, and an original venture into gently poking fun at paranormal romance. Gently—I’m not a monster. 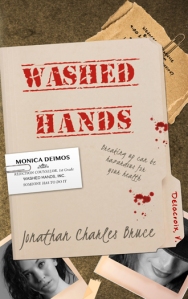 Breaking up can be one of the hardest things a person can do, something that the dedicated team at Washed Hands, Inc. thoroughly understands. Whether one’s soon-to-be-ex is manipulative, violent, or anything else that makes a clean break difficult, the company’s rejection counselors ensure that the split is established and maintained in no uncertain terms. And in the toughest cases, no one’s better at this than Monica Deimos.

Brought in on what appeared to be a relatively straight-forward domestic nightmare, Monica

realizes all-too-late that she has been set up to take the fall for the murder of a wealthy socialite.

As the police close in, Monica needs to discover who she can trust, who wants her out of the way, and why she was framed.

She’s no fool, though. The best case scenario ends in a jail cell… the worst in a body bag.

Jonathan Bruce began writing what amounted to terrible Star Trek: The Next Generation fan fiction when he was four. Although the original manuscripts are lost (or perhaps destroyed), we can rest assured that his prose has improved significantly since then. After high school, he began writing and directing plays which gradually improved depending on whom you ask. He discovered his love of a good fight scene after writing a Dracula knock-off which took a 19th century classic and made it less about Victorian yearning and 300% more about stabbing things in the jugular.

And yes, this means he wrote vampire fiction before Stephanie Meyer made it cool to sparkle in the sun.

He has a Master’s Degree in History, thanks largely to his thesis focusing on MUSIC, a Milwaukee-based school desegregation campaign during the 1960′s. He also enjoys discussing/making fun of pop culture of the 20th century and reading books of a non-historical nature. In his off moments, you can catch him writing for fun or making inane movies about nothing in particular. He also occasionally provides work for Twenty Four Pages a Second, a pretty keen website you should totally check out.