Q: Please tell us about yourself.

I have always wanted to be a writer. I was very observant as a child. It was natural for me to just watch and listen to everyone. I knew from an early age—probably five or six–that I would be a writer. It’s wonderful to immerse yourself in your characters and storyline and forget about real life. But eventually you have to go back! I live in Denver, Colorado, which is a beautiful city at the foot of the Rockies, and I’m married to a wonderful man who lets me spend as much time as I want working on my novels.   I think he wishes I were a better cook, but the kitchen is not where I shine. I need to get more involved in cooking—I think it’s a great art and skill.

A Dead End in Vegas is a dramatic novel about a married woman in Denver and a married man in Chicago who connect on Facebook and have an Internet affair. After six months, they decide to meet for a week in Las Vegas. She gets there; he doesn’t. He sends a friend to take her to dinner. She has an affair with the friend, and ends up dying—of natural causes—while in bed with him. This tragedy causes much pain and turmoil in the lives of the family and friends she leaves behind. The book follows their lives for the next seven years. But it’s also a look at the dark side of Facebook and the anonymous Internet culture with its hidden dangers that we’re so unprepared for. t’s a dramatic book, but it also has a lighter side.

Q: What inspired you to write A Dead End in Vegas?

I wanted to explore the emotions of people who meet on the Internet—and think they know each other–but really don’t.   I also wanted to take a look at long-term marriage and it’s complexities and problems, and what happens when people who have always known a safe, normal existence suddenly find themselves coping with a shocking tragedy.

Q: How much time per week do you spend writing/editing your work?

I probably spend 30 to 35 hours a week. I would say, on average, five hours a day, seven days a week. It’s a very intense schedule, but your mind is always focused on your work, so you’re not really comfortable doing anything else.

Henry James, Edith Wharton, and Gustave Flaubert. I admire their lavish descriptions and complex, in-depth characters. I would love to know how they did it, and how they felt about it.

I’m marketing the new novel, which is enjoyable because I get to meet lots of nice, interesting people. I have ideas for other novels—and maybe a sequel to A DEAD END IN VEGAS–but nothing firm at the moment.

Title: A Dead End in Vegas

When the nude body of Dave Sloan’s wife, Tricia, is found dead at the Bellagio in Vegas, he’s stunned.  Why was she even there when she told him she was going to a conference in Phoenix?  Tricia Sloan’s mysterious death shatters, and later transforms, the lives of those closest to her. 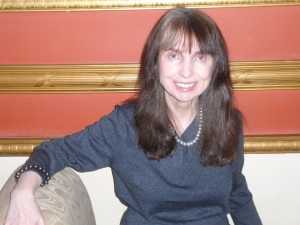 Irene Woodbury’s second novel, A DEAD END IN VEGAS, is a dark, probing look at marriage, infidelity, revenge, and grief.  Immersing herself in drama and dysfunction for months on end was a challenge for this upbeat author, whose first book, the humor novel A SLOT MACHINE ATE MY MIDLIFE CRISIS, was published by SynergEbooks in 2011.  At first glance, the two novels seem quite different, but both deal with midlife confusion and chaos, and the complexities and unpredictable nature of the human heart.  And both, of course, are partially set in Las Vegas, a city Irene got to know well during her years as a travel writer.  Between 2000 and 2005, her stories appeared in major newspapers in the U.S., Canada, and Europe. Irene, who graduated from the University of Houston in 1993, lives in Denver with her husband, Richard, a retired correspondent for Time Magazine who edited both of her novels.  The couple miss traveling, but, after two novels, Irene insists there’s no greater journey than the one into your own heart and mind.