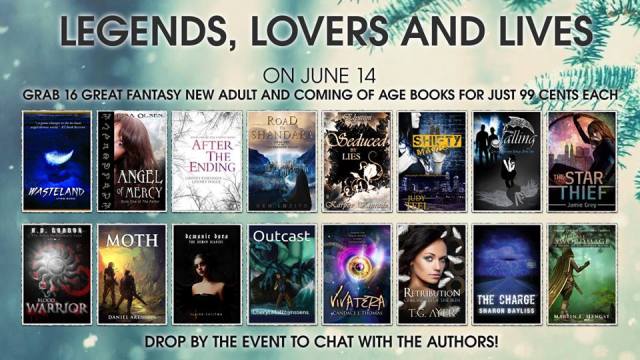 Summer is here, which means it’s time to squirt on the sunscreen (skincare is important, folks), hit the hammock, and ride off on some daring literary adventures with a good book. Of course, it doesn’t hurt to save some money along the way, especially if you drink up novels faster than a kindergartener with a juice box.

Lucky for you a wonderful group of authors want to blow your summer reading list out of the water at a price that you can afford. This Saturday, June 14th sixteen authors will participate in the Legends, Lovers and Livesevent and lower the price of one ebook to $0.99 on Amazon. Every book participating in the event is in the Fantasy New Adult and Coming of Age genres.

Haven’t heard of New Adult books? Don’t miss out on this cool genre a moment longer. New Adult books usually feature protagonists between 18 – 25 years old as they deal with the challenges of transitioning into adult life. Since these books are set in Fantasy and Paranormal worlds, our heroes and heroines don’t just have to worry about college and first jobs. They might also have to escape the occasional vampire (unless they are the vampire), fight off some zombies, participate in a secret holy war, or tumble down a vortex into a new dimension.

Please help us make this event a success by stopping by our Facebook event page on Saturday, June 14th. Participating authors will be on hand to answer questions, and we’ll be giving away some small goodies. Here’s just a short teaser from each of the books participating:

Aaron Jace was just a normal college kid who’d never heard of a place called Shandara until he discovers two mystical swords among his deceased grandfather’s possessions. Now Jace will be pulled into a war that spans worlds where the deciding weapon is…him.

When Mercy wakes up in the hospital after a brutal stabbing, she has little recollection of the attack – only the blurred memories of a mysterious stranger with piercing blue eyes that haunts her dreams. Her savior turns out to be less than human, or is he more?

When her home is attacked by murderous vampires, 17-year-old Alexa is forced to leave her mother for dead in order to save her sister. She soon learns that she is the last known member of an elite race of supernatural warriors, and is thrust into a world full of vampires and werewolves who all seem to regard her as some sort of savior.

When a stranger murders Maya’s boyfriend with a single touch, drags the college sophomore to an abandoned storage unit, and injects her with a DNA-altering serum, Maya prays for a savior. Instead, two young men claiming to be her half-brothers pull off a belated rescue. Now Maya is swiftly transforming into an “angel”, one of the scientifically-enhanced, energy-sucking creatures her brothers have spent their whole lives trying to destroy.

Addison Kittner makes her living as a private investigator and bounty hunter. One night she comes across a girl about to be killed by three rogue vampires. Addison kicks some vamp butt and saves the girl. Just her luck, one the escaped vampires turns up dead the next morning, inspiring the vampire leaders to put pressure on her to solve the case or take the rap. As if that wasn’t bad enough, her ex-lover, werewolf FBI agent, Cooper Daine, gives her an offer she can’t refuse…a paycheck. Mixing business with lust is never a good idea, but neither is starving.

Bound by the blood contract his human mother signed four centuries ago, half-demon, David Sadler, must obey his demonic Master’s order to capture fifteen-year-old Jessica Hanks. But as he learns more about her, he realizes she may be the key to freedom from his dark enslavement.

Dora Carridine is trying to summon a demon, but she’s not very good at Latin and nothing ever works out the way she plans. Her life is fraught with weekly exorcisms and having to watch her father’s fire and brimstone TV show every Sunday. So, when Dora finally succeeds in summoning an incompetent demon lord, she’s absolutely delighted when all hell breaks loose.

Evie belongs to the Brotherhood Irin and together with all the other Angels of the world she is protector to humanity, protector against evil. But evil has found its way into the Brotherhood. Someone has murdered her guardian and Marcellus, the New Master makes demands of the warriors that go against all they stand for. Demands Evie just can’t carry out.

When the King of the Texas Empire kidnaps Warren’s brother, Warren embarks into a still Wild West to save him. On his journey, he makes a discovery that changes his life forever–he and his brother are long-lost members of the Texas royal family and the King wants them both dead.

Long ago the Earth stopped spinning leaving one half of the planet in the sunshine and the other half forever bathed in darkness. The humans split into two distinct races that believed the other to be a myth. The secret will soon be out as rumors and prejudice set the stage for war.

After thirty years of loyal service to the Imperium, Royce just wanted to retire to a peaceful frontier town. His peace is short lived when he intervenes to save a young slave girl about to be executed for a crime she didn’t commit. The girl, Tiadaria seems to possess the same magic Royce has hidden all his life. Now he must teach her about her unique abilities before they both run out of time. An ancient menace is coming, and they have a thousand years of bloodthirsty vengeance to exact.

Alador is a young man of mixed heritage who cannot fit into the worlds of his father or mother. His encounter with the blue dragon Renamaum ignites a powerful bond that may finally restore the pact between man and dragon.

After the Endingby Lindsey Pogue and Lindsey Farleigh

Dani O’Connor and Zoe Cartwright both survived the Virus and must now contend with the post-apocalyptic aftermath where strange new abilities begin to manifest. The two best friends are on opposite sides of the country when the Virus strikes. Now they must trust strangers, make sacrifices and even kill to find one another again.

Rose and Derek have settled into married life and are enjoying their new jobs teaching paranormal kids. Everything seems idyllic, until paranormal teens start showing up dead in the local news, killed by what looks like a wolf attack. As Rose, Derek and their friends seek out the truth of these mysterious killings, a Bishop sent by the Pope arrives to undo everything they’ve worked so hard to build.

At twenty-three, Renna Carrizal is the most notorious thief in the galaxy. There’s just one problem – she wants to get out of the business. After Renna rescues an injured boy on her final job, she finds herself on the run from the mob instead of enjoying retirement. She unwittingly becomes ensnared by MYTH, a top-secret galactic protection agency, who offer her a choice – either help them on their latest mission, or spend the rest of her life on a prison ship.

Not even Naomi’s prophetic dreams prepare her for the mysterious wanderer who appears just in time to snatch her from danger—nor the upheaval he brings in his wake. No knight in shining armor, Reynolds once risked Naomi’s life, and that dark secret again threatens it. When Naomi discovers the world of magic and of what she is capable, not even Reynolds can slow the fate barreling down upon them both.

>>> Stop by Our Event LEGENDS, LOVERS AND LIVES for Author Chats and Giveaways on June 14th <<<

This entry was posted in Promo Posts and tagged events, promo posts. Bookmark the permalink.