Book Review This Could Have Been Our Song 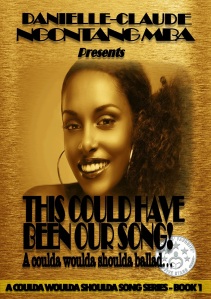 This Could Have Been Our Song! A coulda woulda shoulda ballad… – Book One

Love can be such a “coulda, woulda, shoulda” song sometimes…

Lucia Mpobo-Riddell could have been a dancer like the rest of women of her family but instead she chose music. Marcus Grant could have been a doctor like the rest of his family but instead he chose music. She also could have not fallen for Marcus on her birthday but she did. And Marcus, he could have told Lucia the truth about his real reason for being in Toronto that night, but he didn’t. Now they have to deal with big reveals and consequences: Marcus almost stealing her job and being force to work on an album together. Marcus, because he couldn’t swallow his pride, leaves Toronto and goes home to London. Lucia, because she just couldn’t give up on her first amazing opportunity to produce a whole album. And to complicate the situation further, the band they’re working for is not the easiest one. Mary Gillis, Marcus’ on and off flame, still has a hold on him. Greg McMullen, Lucia’s close friend and former dance partner is back in town and has been in love with her for years. Then there’s Marcus and Lucia, in the middle of their own a professional and personal tug-of- war with each over and the rest of the world. But maybe things could still work out… All things considered, this could have been one heck of a love song!

This Could Have Been Our Song is a contemporary romance novel that mixes humor and romance in an interesting story. It’s the first in a series, and I’m intrigued to start the second book now.

Lucia and Marcus, the main characters, both have one thing in common (at the least): they both chose music over the professions their family members wanted them to choose. They both come from a different cultural background, which adds a whole new layer to the book.

But when Greg, Lucia’s former dance partner, who’s been in love with her for years, shows up again, our two main characters get stuck in a love triangle of epic proportions.

The writing and characters were good, and the plot was great. It definitely kept me entertained. If I had to point out some flaws, it would be the unnecessary background information dumped on the reader every now and then.

Buy your own copy of the book:

1 Response to Book Review This Could Have Been Our Song