I’m happy to host author Evie Gaughan on my blog today. Evie’s novel, “The Cross of Santiago”, releases today. It sounds like a fabulous read! I had the opportunity to ask Evie some questions, and had a blast reading her responses. Oh, and you can win an eBook copy of “The Cross of Santiago”. Scroll down to find out how you can participate!

1) Please tell us about yourself.

First of all, thanks for having me on your blog today!  I am a thirty-something Irish writer living in Galway City (where my novel is based) on the West Coast of Ireland.  I spent most of my twenties travelling in France, England and Canada, but I’m a bit of a home-bird now.  I studied Marketing and Social Studies in University, but I think I always knew I wanted to be a writer from a young age.  I now write freelance for magazines, but when I am not doing that, I love to paint and have recently launched a craft range with my hand-drawn designs.  I love being creative, that’s what makes me happy.
2) Tell us about your book.

‘One cross will bind two couples across four centuries…’

The Cross Of Santiago is a Time Slip novel set in Ireland.  Amanda Morrison, the protagonist, has her world turned upside-down when a long-lost relative from her birth family bequeaths a mysterious heirloom.  This golden cross sets her off on a journey to uncover the truth about her birth family’s past, but leads her further into the past than she bargained for.  With the help of an haphazard hypnotherapist, Amanda discovers the Medieval world of Annora and how their lives are eternally linked.

Meanwhile, Xavier de la Cruz is running away from all his problems in Spain and arrives on Irish shores, the victor in a Global Yacht Race.  Something of a treasure hunter himself, his path seems destined to cross with Amanda’s, igniting a passion that will challenge their very souls.

Full of intrigue, humour and adventure, The Cross Of Santiago unlocks the secret to an ancient love story that is destined to find its happy ending.
3) What inspired you to write  The Cross of Santiago?

As a reader, my favourite genres are Historical Fiction and Contemporary/Chick Lit.  However, I would always have to enjoy each genre seperately, secretly wishing that I could have both in one book.  Then I discovered a new sub-genre – Time Slip, and I couldn’t have been happier!  As a writer, I wanted to bring my own voice to this genre and to write a time-slip novel that is unique to my own experience.  So I began drafting a novel based in Ireland, set against the backdrop of the fall of the Spanish Armada in 1588, with a modern day protagonist who has a mystery to solve.

4) How many hours per week do you spend writing?

I don’t actually count the hours I spend writing, instead I try to have a target wordcount of about 5,000 words per week.  I usually write in the mornings, but I don’t keep a strict schedule, so if I get blown of course during the week, I know I can make up for it.  I know some authors would be much more disciplined in their approach, but when you’re self-publishing especially, there’s always something that is going to come along and steer your attention elsewhere, so I think you need to have flexibility.  Although one invaluable tip is to write on a computer that doesn’t have an Internet connection!

5) If you could meet three authors, which authors would you choose?

Ooh, that’s a great question!  Firstly, I would love to meet the late, great Maeve Binchy.  She was such an inspiration to all Irish writers and I would have loved to have sat down with her and just gossipped about things!

Diana Gabaldon would be my next choice – I’d love to pick her brain about how she makes her Outlander series so addictive.

Finally, I’d like to meet C.S. Lewis, not only to discuss the creative process involved in his Narnia books, but to be in the presence of someone so insightful and imaginative.

6) What are you working on at the moment?

For the moment I am putting all of my energy into promoting The Cross Of Santiago.  It is so exciting to have my story out there, I want it to reach as wide a readership as possible and to get their feedback.  However, I have already written a rough draft for a new novella based in Paris, which I am excited to get back to.  The story will also have historical elements, so hopefully the readers will enjoy it too!

About The Cross of Santiago 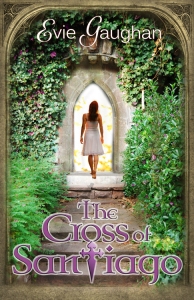 “One cross will bind two couples across four centuries”

An ancient love story, locked in the heart of a sunken treasure, is destined to find its happy ending… even if it takes four hundred years to do so.

Amanda Morrison does not believe in love or destiny, but when a long­lost aunt leaves her a mysterious golden cross in her will, her uneventful life in Galway City is turned upside down. The arrival of Xavier, a charismatic yachtsman in search of treasure and adventure, complicates life further, as their paths seem destined to cross. While Amanda tries to uncover the truth about her family’s past, a strange series of events ensues involving hippy hypnosis, five­a­side football, scary sheep, and radical reincarnation. Though, not all in that order.

Evie has always been a storyteller. From a very young age, she held a captive audience (mostly with rope!) as she performed her party piece, which involved sitting on a high stool and telling extremely tall tales.

Things have moved on a bit since then and Evie’s love of storytelling has blossomed. Having published a number of short stories and articles for Irish magazines such as Woman’s Way and GalwayNow, she is set to launch her debut novel, ‘The Cross Of Santiago’, on September 16th 2013. A time-slip novel full of intrigue, humour and romance, it is an exciting blend of historical fiction and contemporary women’s fiction.

Evie lives on the West Coast of Ireland in Galway City, where she shares her home with two sewing machines, an easel and a guitar that refuses to stay in tune. She is greatly inspired by her hometown, which is not only the setting for her novel, but also the subject of her other passion, art. She has several paintings currently exhibiting at the local gallery, featuring vibrant streetscapes and quirky designs. Evie is currently working on her second novel and short story collection.

Win an ebook copy of The Cross of Santiago to celebrate the release day!