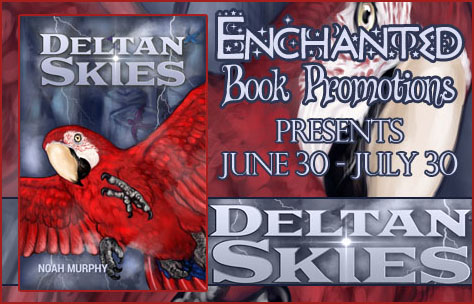 I’m hosting an interview today with Noah Murphy, the author of fantasy novel “Deltan Skies”. Thanks for answering my questions, Mr. Murphy!

I grew up in the Washington DC area and currently live in Germantown Maryland. I am high functioning autistic, although I was part of the generation right before autism awareness so I was put through normal schools, which was difficult, but helped me gain the skills to lead as normal a life as I can. I wasn’t officially diagnosed until I was 26.

My autism makes my life difficult, but also has blessed me with a powerful imagination that hasn’t lessened much with age. The worlds and the stories bouncing inside have always been there and writing has been the outlet. I mostly wrote short stories through my teen years and didn’t start on long fiction until my early 20s. However, it wasn’t until 2011, when I was 28, that I decided to self-publish and put my work out there.

2) Tell us about your book in five sentences or less.
In a technological dystopia, a race of disenfranchised birds fights back against a city that denies them existence. An elven mage gets stuck in the middle.

Deltan Skies started life as the first work I ever self-published, a fantasy thriller novella entitled A Clear and Feathered Danger.  The novella was set in a world called Terrall which was high-fantasy world brought technologically into the realm of science-fiction. As a result, dragons and elves exist among laser weapons and cyborgs. It had the same plot and characters as Deltan Skies, but was a third of the length and focused almost entirely on action. While the novella went on to sell over a hundred copies, its two sequels did terribly. Ultimately, I decided that the trilogy, known as K23 Detectives, was not nearly as good as it should have been for a variety of reasons, including too little world building and not enough characterization.

In November 2012, after releasing my superhero novel Ethereal Girls, I sat down to revise A Clear and Feathered Danger.  What started out as a simple revision and expansion eventually morphed the novella in full-length fantasy novel that bared little resemblance to the original. I deleted the entire second half and took the book in an entirely different direction while emphasizing world-building and characterization.

Consequently, the world of Terrall has never been so vibrant and engaging as it is in Deltan Skies.

It can vary wildly. When I’m working on a novel full tilt it can be dozens of hours. Other weeks I can spend no hours writing, unless you count twitter as writing, then it’s a dozen or more.

5)      If you could meet three authors, which authors would you choose?

The only author that comes easily to mind is Joseph Conrad. I guess if I had to meet two others, I’d like to meet Phillip K. Dick and R.A. Salvatore.

After I finish editing a book, I take a creativity break for a month or two to let my imagination recharge. Writing and editing is an exhaustive process so I find I stick with project until its completion more often if I can devote my full creative energy to it. Since I was editing Deltan Skies right up until I released it in late May, I’m still on my break, but I’ll most likely start work on my new world sometime this month.

That project will be something called the Animal Zombie Apocalypse, which is a zombie story where all the animals in world become rabid at once and mercilessly attack humanity. It will follow a few people from animal related-professions as they try to survive and make sense of what is happening. It will of course have a deep environmental message, but I will balance it with numerous exciting horror set-pieces featuring cute and not-so-cute animals devouring people. 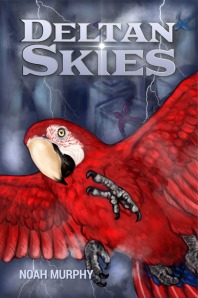 A young elven mage named Quintanelle Fillion flees from her totalitarian homeland to New Delta, a dense metropolis made up of hundreds of mile-high towers. She finds employment working for New Delta’s top private detective, a human named Alfonso Deegan, and his red dragon associate Mordridakon. Quintanelle’s first case thrusts her in the middle of New Delta’s own problems.

After millennia of oppression, members of the disenfranchised avian race have taken complete control of the criminal underworld, but what they want is the one thing they can’t steal. To achieve their goals, the avians’ charismatic leader enlists the help of a goblin shaman cast out from her own suffering people. Together they create a risky and daring plan that involves everyone from the city’s inept mayor and a corrupt city senator, to Quintanelle’s new boss and even her own family.

As their plan unfolds, a dark reality emerges. New Delta stands on the brink of total annihilation, and Quintanelle may be the only one who can stop it. 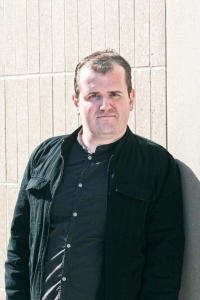 Noah Murphy grew up in Montgomery County, Maryland which features prominently in his writing. After graduating from Goucher College with a double major in philosophy and religion, he began a pet sitting service. In his spare time Noah volunteers at a not for profit parrot rescue. His love of animals provides inspiration for many of the anthropomorphic characters in his books.

Part of the generation just before autism awareness began, Noah was diagnosed at age 26. For him, a later diagnoses was a hidden blessing. Being forced to be “normal” gave him the skills and knowledge to publish and run a business.  Autism also unhinges his mind, allowing him to approach situations and characters in strange new ways, and seriously enough to make them work.

An avid writer, Noah Murphy is the author of the fantasy novel Deltan Skies, and the superhero novel Ethereal Girls.  He  also enjoys sharing his opinions on life, literature and popular culture with his 29,000 followers on Twitter and on his blog.

This entry was posted in Author Interview, Book Tours. Bookmark the permalink.