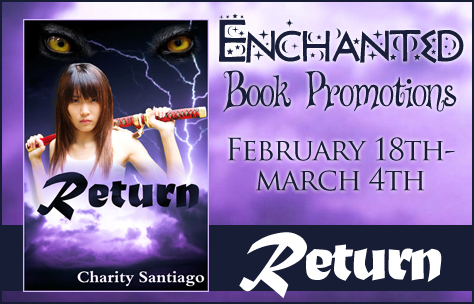 I’m hosting an interview with author Charity Santiago today, the author of YA fantasy “Return”.

1) Can you tell us a little about yourself?

Sure thing! I’m 28 years old, an Education major, a native of Arizona, and an avid reader of romance, fantasy and sci-fi. When I’m not reading, writing or doing homework, I love to play board games and watch movies with my family. After watching the Tom Hanks movie “Larry Crowne” last year, I bought myself a 150cc scooter and a ladybug helmet, and I go riding every chance I get. Someday I’d like to start my own scooter gang, but I have to find someone else who owns a scooter first!

2) Can you tell us about your book?

“Return” is a young adult fantasy, with some paranormal and romantic elements. The story focuses on eighteen-year-old Ashlyn Li, heir to the kingdom of Toryn. Ashlyn has been running from her birthright for the past three years, but when she finds out that her absence has started a war, she realizes it’s time to face her destiny and take responsibility for her actions. In the midst of the war to save her kingdom, Ashlyn finds herself drawn to Drake Lockhart, an enigmatic vampire who is tormented by his past. She also begins to feel something for her former enemy, a sarcastic assassin named Vargo. There is a lot of action in the book, including a number of pulse-pounding fight scenes and a few unexpected twists.

3) What was the inspiration for Return?

Several years ago, I got caught in a storm outside my house, and I suddenly had a vision of a lone warrior trudging through the rain, completely isolated, with only her thoughts and her regret to keep her company. I wrote the opening of “Return” before I even had any idea what the story was about, and from there I built the plot around whatever idea sprang into my head at any given moment. “Return” is a mash-up of fantasy and supernatural, from magic to martial arts to vampires to shape-shifters.

4) What was the most challenging part about writing the book?

It was very difficult for me to find an appropriate balance for the romantic sub-plot in “Return,” as well as its sequels, “Regret” and “Redemption.” I knew I wanted some romance, but I didn’t want it to overshadow the main story, which was about an eighteen-year-old struggling to accept her destiny and assume leadership of her kingdom. You will see my personal indecision bleeding over to Ashlyn’s internal dialogue in some parts. She feels guilty for even considering romantic entanglements while her kingdom is at war, but there is something about these two men- Drake and Vargo- that she finds irresistible. I honestly can’t blame her- they are both sexy!

5) Do you have any advice for aspiring authors?

I wish someone had told me when I first started writing professionally that writer’s block is completely natural. Two years ago, I felt like a failure because I wasn’t getting any inspiration, but eventually I realized that you have to push on through those instances of writer’s block. Force yourself to write, no matter what. Even if it’s terrible, at least you’ll have written something, and something is better than a blank page.

6) If you could meet three authors (dead or alive), which authors would you choose?

Oh, it’s so difficult to narrow it down to just three! Um, if I had to pick, I’d go with Jennifer Crusie, Richard Matheson and Oscar Wilde. They’re all from different eras and different genres, but I think that the three of them together in one room would make for fascinating conversation.

7) Can you tell us about your current work in progress?

Absolutely! My next project is titled “Blood Lust,” and it’s the first in a planned series about a 17-year-old girl in North Dakota who is bitten by a werewolf, and finds herself dragged into a power struggle between the werewolf pack and a vampire coven. I’m excited about “Blood Lust” because it definitely has a racier feel to it than most of my previous works. While I tried to focus more on the action in “Return” and its two sequels, with “Blood Lust” I am embracing the romance and smoldering sexual tension wholeheartedly. “Blood Lust” will be available for Amazon Kindle starting April 12, 2013.

Purchase your copy from Amazon!

For the last three years, eighteen-year-old Ashlyn Li has been running from her destiny. A free-spirited ninja, Ashlyn would rather loot an abandoned city or challenge a fiend to battle than assume leadership of Toryn, her father’s kingdom. However, when a series of attacks reunites Ashlyn with the friends who helped her save the sun three years ago, she discovers that her kingdom is at war and her father has presumed her dead.

Suddenly Ashlyn is faced with not only fulfilling her birthright, but also making sense of her feelings towards two very different men- Drake Lockhart, the enigmatic vampire who captured her heart three years ago, and Vargo, the charismatic assassin who was once Ashlyn’s sworn enemy.

Will Ashlyn ascend the pagoda and become Lady of Toryn?

In February 2011, Charity Santiago’s 7-month old son was admitted to the hospital with severe respiratory issues. While Charity stayed at his bedside, she kept them both entertained by downloading several books on her new Kindle and reading them out loud. It was during this time that Charity learned about Kindle’s self-publishing program, and realized that she had an opportunity to share her writings with the world.

Charity is a native of southeastern Arizona, and a writer since childhood. She wrote her first manuscript, Guinea Pig Code!, at age nine. When she’s not writing books, Charity spends her time wrangling children, watching Sylvester Stallone movies and pursuing a degree in Education.

The author was kind enough to offer a $10 Amazon Gift Card giveaway during the tour. Click on the link below to be taken to the Rafflecopter form to participate.
a Rafflecopter giveaway

This entry was posted in Author Interview and tagged author interview, fantasy, YA. Bookmark the permalink.