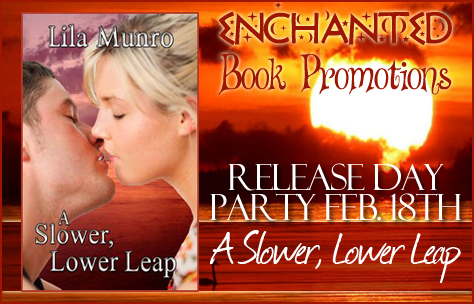 We’re celebrating the release for contemporary romance novel “A Slower, Lower Leap”. Purchase your copy today from Amazon, ARe     or Nook

“I didn’t mean to scare you.” He handed her the cup she’d been looking for. “And Colby’s with Mom. He’s safe. I wouldn’t do anything to hurt that little guy. I wanted to talk to you, away from all those little rows of corn.”

“About what?” Lizzy popped the capsules in her mouth and chased them with a healthy swallow of tea.

“You must be joking. About what? About whatever it is I feel when I’m within spitting distance of you. And you just admitted you feel it, too.” Slowly inching toward her, Logan backed her into the door frame until she had nowhere left to go.

“Feeling things and doing something about those things are two different things,” she said, her heart rattling in her chest as her eyes landed on his lips.

“Oh, believe me, woman, I’m aware of the difference.” With his blue eyes blazing, he curled one hand around her nape and descended on her mouth before she could protest.

But where Lizzy would have expected Logan to be fierce and demanding, she found he was tender and questioning, for all of two seconds. When she acquiesced, because God help her she couldn’t deny him, he took the kiss deep, delving between her lips as if he were a man starved. Running her arms around his neck and leaning into him, Lizzy let that kiss run clear to her toes and back, heat settling in every minute hiding place along the way to simmer and tease. His hand shifted to her jaw, his other cradling her head and she took what he gave with greed. How long she’d needed, how long she’d been without this, the human connection between two people with mutual desires. And Lizzy wanted so much more. If Logan had pushed for more she feared she’d have given in right there and freely turned over whatever he asked for.

“Logan?” she whispered when he pulled away and touched his forehead to hers.

“Shhh…” He placed his thumb over her lips. His breath came in short gasps matching hers. “No. Let it be.”

About A Slower, Lower Leap

When you’re the last man standing…

Not only was Logan Delaney the last of his siblings to remain unmarried and unsettled, his entire family believed he’d never find a wife. The baby of eight, he’s been dubbed an irresponsible player and told he’ll never amount to a hill of beans. And at one time, Logan may have been okay with those descriptions, but no more. On a quest to prove his worth, he’s spent the entire summer learning the family business, staying in at night, and saving his money. And if his family would stop meddling in his affairs and trying to dictate who he should and shouldn’t be seeing, he might just show them he’s found the one, Lizzy Jenkins.

And have a bad reputation to blame…

Elizabeth Jenkins had always known Logan Delaney existed, but he’d never so much as turned one glance her way until she handed him his butt on a silver platter in three sentences or less over the phone. After that it seemed at every turn there he was and the more she resisted the heat building between them, the bigger the fire got. Until his family interfered. And why wouldn’t they? Between Logan’s legacy and her baggage, they were a disaster in the making.

Can you be trusted with a fragile heart?

But Logan doesn’t run when he finds out about Colby. In fact, he embraces Lizzy’s special needs son and defies the advice of everyone urging him to leave Lizzy alone. But after one moment of weakness, Logan finds himself knee deep in a marriage complete with the little boy whose father bailed before his birth and Lizzy’s grandfather, who needs constant care as well.  Then there’s the man who just might be the demise of it all.

Lila Munro currently resides on the coast of North Carolina with her husband and their two four-legged kids. She’s a military wife with an empty nest and takes much of her inspiration for her heroes from the marines she’s lived around for the past fifteen years. Coining the term realmantica, she strives to produce quality romance in a realistic setting. Her genre of choice is contemporary romance that spans everything from the sensual to BDSM and ménage. When she’s not writing, she enjoys reading everything she can get her hands on, trips to the museum and aquarium, taking field research trips, and soaking up the sun on the nearby beaches. Her works include The Executive Officer’s Wife, Bound By Trust, Destiny’s Fire, Salvation, Three for Keeps, the Force Recon series, the Slower Lower series, and the Identity series. She’s a member in good standing of RWA.

This entry was posted in Release Party and tagged release day party. Bookmark the permalink.